My phone has a hairline fracture across the screen. It is also shattered on the bottom left corner.

And it happens to be all held together by one, pink band-aid.

Other than the cosmetic problem, it works perfectly well. Sure, I’m afraid the screen will crack and slice my cheek while on a call. Or while blogging, my thumbs will cause the entire screen to crack, like thin ice under a sumo wrestler. But now I find the process exciting.

Recently, I found out I wasn’t the only one that felt somewhat excited about my phone.

As many women do, I enjoy getting a mani/pedi every now and again. It makes me feel pretty and clean and girly. I never really learned how to do it myself, to the dismay of my grandmother who is a retired manicurist. I’ve tried, but the fingernails on my right hand end up looking like something that belongs in a modern art gallery. So to look and feel pampered on a budget, I make my way to the Asian-run nail salon.

I hate to admit it, but I don’t know what Asian country the majority of them are from. I feel it is rude of me to ask. That, and, frankly, we could hardly communicate about the color I want. I can’t imagine holding a where-are-you-from conversation. I know that not all of them speak the same language, as the chatter between the technicians varies in tone and musicality. Also, some of them speak to each other in English and I don’t think it’s for practice, but out of necessity.

This week I was taken care of by Toby. Toby is what’s on his name tag, but his cosmetology license says something completely different. Anyway, when Toby was done with my pedicure, he helped me take my belongings to the manicure station. Only, one of those items was my slightly cracked phone with a band-aid.

I noticed Toby staring at my phone in disbelief. He looked up at me and showed me my phone, like if I hadn’t noticed. So, I gave him a half smirk and nodded my head like, yeah, that is really my phone.

All of a sudden there was chaos. He ran over to a colleague and showed him my phone and then something was said and then three more technicians came over. The wax lady came out of her room with a popsicle stick with gooey wax in hand to see what all the commotion was about. The group walked my phone over to a manicurist that was in the middle of gluing on acrylic nails so she could see. And with every new person that was shown my phone, Toby would point me out to them and everyone would laugh. The clients, of course, had no idea what was going on, for all they knew I was showing the staff naughty pictures on my phone.

Finally, Toby made his way back to my table. While working on my hands he asked me if I wanted to sell him my phone. The question stunned me. Toby wanted to buy my cracked phone? Was he insane? I declined his offer, but stayed curious as to how much he was willing to pay. But, again, I didn’t ask.

A few days later, while admiring my manicure, I remembered that whole ordeal and laughed to myself. What did they see in my cracked phone that was so funny? Most importantly, I felt like there was no way I could part with my phone now. It, apparently, is the best communication bridge I’ve ever had.

I wanted to make a phone call, to share this funny story with a friend. So I pressed the home button that lights up the screen, when it finally dawned on me:

They were looking at my wallpaper. 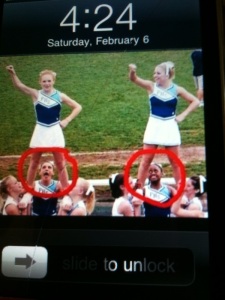