It’s 2 p.m. and somewhere in Miami there’s a throng of gays and lesbians scrambling to find rings and making impromptu bouquets. My heart is filled with overwhelming joy and can’t wait to see my basic cable channels flooded with images of happy couples kissing on the six o’clock news.

To clarify, what is happening is that a judge has allowed same-sex marriages to take place throughout Florida – even though there is an appeal pending.

Like a dark cloud over a gay pride parade, I can’t help but look up at that appeal and wonder if it’s going to ruin Lady Bunny’s make up.

I’m not sure that’s the right analogy.

I’m just a bit concerned. This is the state of Florida. Strange things happen here. For example, on the heels of this announcement five counties have stopped marrying people all together. That’s right straight people of Duval County, you can’t get a quick courthouse wedding – how does it feel to be on the other end of the Lady Gaga stick now?

Something interesting does happen when you can’t really marry the person you love, and that is you learn to improvise.

Very early into our relationship, when I was still trying to impress her with my audaciousness, I convinced her to attend a pagan festival that honored the harvest moon. Several times we avoided each other’s glances to prevent embarrassing giggle attacks, except when we were invited to light a candle together and quietly set our intentions. There was something about that moment – one that we still talk about today – that felt like we were at our own wedding.

She is of the opinion that I orchestrated that whole thing to trick her into marrying me under some New Age binding spell, but I’m simply not that clever.

A few years after that, we proudly drove to the nearest Kinko’s (before the FedEx merger) and had our Miami-Dade County Domestic Partnership affidavit notarized by a lovely woman named Yosneidy who tried her best not to give us the side-eye.

Six weeks later we received our certificate, which, in case of an emergency, I could show to a nurse at Hialeah Hospital in the instance that she wouldn’t let me in the room to see the Librarian. Luckily, I’ve never had to use it. Mainly because I’m the one that is constantly injured and the Librarian is always needed in the room to translate my ailments in a way that doesn’t make me sound like I have Munchausen.

And a few years after that, we celebrated the accomplishment of our tenth anniversary on a white-sand beach and, with the sunset as our only witness, we exchanged bands and promises while barefoot.

So, you see, by my estimation, we’ve been sort-of married many times.

But honestly, I just want to be married-married for real one time.

And as much as I want to mark this historic day with my unofficial wife, it would be too much to bear to have my real, legal marriage taken away from me if the appeal doesn’t go the right way.

At the risk of sounding like a beauty pageant contestant, all I want is for all adults to be able to consensually marry the person they love. It’s not that hard. Ask the Attorney General of Florida, she’s done it twice (and twice divorced).

It seems like all signs are finally pointing in the right direction, so I’ve decided to begin chilling that champagne bottle a dear friend gave me expressly to open on the day when I finally got married.

In the meantime, I wait, I watch, I celebrate those who are much braver than me. Those willing to take the risk of having it all taken away. I’m grateful to them and are in awe of their strength. 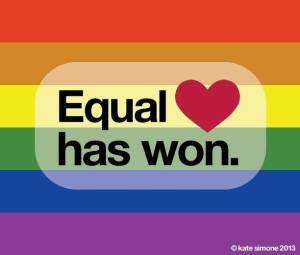