Ever since I could remember, birthday parties were my thing.

These types of parties are not your regular breed of group celebrations, as they generally end in tears, bruises, and paranoid delusions – especially when you weren’t invited in the first place. 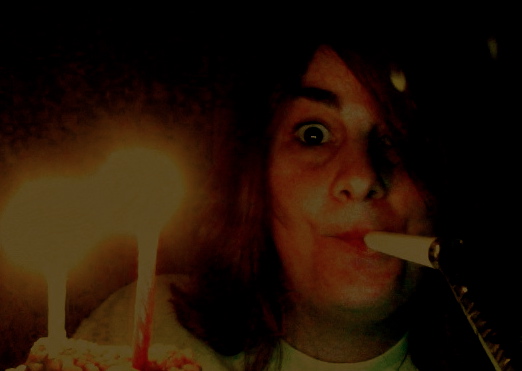 Chapter 5 – Fear of Missing Out on Birthday Parties

In grade school, I had a friend that was a Jehovah’s Witness, which at the time I thought was a branch of the Witness Protection Program. One that protected children, not from “bad guys,” but from Halloween candy, Christmas presents, and, most often (and apparently most dangerous), the flames from candles on a birthday cake.

It was difficult for me to understand why she needed protection from parties. I also couldn’t understand why her mom sewed all her clothes. Yet, nothing was crueller than watching an adult swoop her out of the room (much like the federal agents did to Elian Gonzalez) every time a cake was wheeled in.

It is with much thanks to that little girl that I learned to savor every single birthday party. She is the reason I never turn down an invitation. And, it’s because of her that I tend to invite myself when my name doesn’t make the guest list.

“I can’t hang out, I have that birthday party tonight.”

“Perfect. What time shall I be there?”

Sure, I’ve occasionally invited myself to the less-than-desirable parties in honor of friends’ grandmothers, children, and bosses, but at least I was there. I didn’t have to hear about it from a secondary source. I saw that long white hair on grandma’s chin touch the frosting on the cake with my own eyes. I also know exactly which of the moms and dads were smoking “funny smelling cigarettes” in the park, while a clown distracted the kids. And, I was one of five people who showed up to the douche bag boss’ birthday after he rented out an entire VIP section of swanky night club.

But, I heard somewhere that for every three-hundred shitty birthday parties, there is one good one. One that ends with skinny dipping and/or the threat of divorce.* And if my math is correct, I think I’m almost due. So, you see, I can’t stop going to them now.

*Find the “Blame it on the FOMO” chapter for more on this.

A few years back, I tried to speed up this karmic process by organizing my own birthday extravaganza. I embarked on a four-month expedition of intense research and took an online course in event planning. I shopped venues like a finicky home buyer. I contracted break dancers, only after actually dancing with them. I hired bartenders based on their ability to never use enough mixer. I coordinated three outfit changes that perfectly matched my manicure. And, finally, I spent countless nights compiling the perfect mix of guests that would simultaneously bring elements of class and trash to the party.

As the RSVP’s trickled in, there were inevitably a few declines, but one in particular, irked me to no end. It was that of a dear coworker, whom I had grown very fond of. A delightful woman from the accounting department that showed no hesitation to jump in the pool, fully clothed, during a company retreat. But, as it turned out, she too was a Jehovah’s Witness.

I immediately remembered that little girl from grade school and how powerless I was to help her. But, now I was an adult and could actually do something for that woman who needed saving from her anti-birthday God. So, the morning after her denial, I marched right up to her cubicle and pleaded my case.

“Yeah, but notice I didn’t say it was my birthday party. It’s just a party. It just happens to be near my actual date of birth.”

“No, I really don’t feel comfortable with it.”

“I’m not having a cake. No one will sing. I’m not even accepting gifts.”

“I didn’t make it clear in the invitation, but it’s not really a party, it’s a performance. You people go to shows, right? Don’t you have plays at church? Well, it’s the same thing.”

“I’m not feeling comfortable with this conversation anymore.”

“I’m not feeling comfortable with you missing out on my birthday party.”

“So it is your birthday party.”

“You know what? Yeah. It is. And there will be cake. And candles. And breakdancing. And adult party favors. And booze. And someone will eventually puke in a palm tree. The devil is going to be all up in that place, stealing souls and shit. And you’re going to miss it all. All. Of. It.”

Later that day, we both met with the Human Resources Director who, I might add, accepted my birthday invitation, and we eventually patched up our tiff. And, the following month I did celebrate my birthday, which was…okay. But, I know it would’ve been better if only a certain Jehovah’s Witness would’ve shown up and torn the place down. Eating cake with her hands and shit. Grinding on the dance floor. Covering her bare body with confetti. All while screaming, “I LOVE BIRTHDAYS!”

me:  it’s just like the break dancers from my 30th birthday.

dora shows up to the party, wishes me a happy birthday.

how about a teletubby?

she’s a woman and a feminist and she fights crime

me:  It’s not like there will be adults that will leave crying bc they are scared of Dora.

as a matter of fact, i believe puppets were meant for adult entertainment

thelibrarian:  mami, this is isn’t a private function. dora is not going to walk in. your party will be good enough already.

me:  but bird, if i get permission from the nice people at the hotel can she come?

thelibrarian:  ay whatever you work it out i don’t get it but if that’s what you want so badly. you’re obviously obsessed with puppets.

me:  i’m obsessed with you!