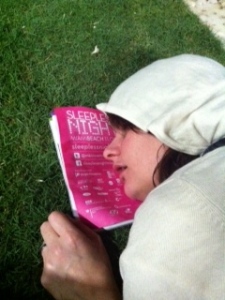 I just finished watching Avicii’s set at Ultra Music Festival. But, even though I’m wearing the same amount of clothes as the girls body surfing across the field of people, I am not at Ultra. I’m nowhere near Downtown. I’m in bed, armed solely with the internet and the wisdom to not go anywhere near that mess.

I watched in horror as the endless crowd pushed up against the stage – to get a closer look at the blinding lights and petite DJ. It reminded me of an incident that happened late last year at the Black Eyed Peas concert – where I had an adult tantrum.

It was after the  fifth hour of standing when I felt something come over me. Within my surrounding wall of bodies, was a geriatric couple on their first date, incessantly making out and rubbing their Viagra induced private parts two centimeters away from my arm.

There was also a coked-out girlfriend who, at the beginning of Cee Lo Green’s set, broke up with her “boring” boyfriend (he was just high on marijuana and not as verbose), and had now taken to celebrate her new freedom by dancing and jumping violently. Her movements kept interfering with my feet, which were firmly planted on the ground. When she began commanding us to jump –  by yelling a la drill sergeant, “Jump! Jump!” – I contemplated, very seriously, to punch her in the boob. But, being close enough to see her augmentation scar, I realized that the silicon might hurt my knuckles.

The Black Eyed Peas also insisted on yelling: “Put your hands up!” “Scream,” “How you feelin’ Miami?!” And, as you can imagine, I had it up to here with the boot camp treatment.

The football field felt like it was about to cave in under my feet, sending me through some hellish rabbit hole with the old couple, Bombs McGillicutty, and will.i.am’s turntables. So, I bolted. Without even thinking. I made my way through the crowd, not knowing where I would end up – leaving behind my friends. After five and a half hours of being on my feet, I finally sat – on a toilet.

As I sat there holding my sweaty head in my hands, BEP played “Boom, Boom, Pow.” Then I remembered, this song was the whole reason I wanted to go to this stupid concert in the first place. By the time I tried to get back to the field, they were on “The Time,” and people where going crazy. I thought I would never find my friends again. Luckily, I had the car keys, so I resolved to head out toward the parking lot and hope to reunite there.

By the time they closed the show with “I Got a Feeling,” my friends were found and we were all walking toward the car. We sat quietly. Letting our ears decompress. Staring out the windows.

I don’t know what they were thinking. But, I know what I was thinking:

I’m just too fucking old to stand in a crowd. I’m an adult. I need a chair, and a beverage, possibly even food, while partaking in entertainment activities.

Sure, it makes me sad. Particularly when watching Ultra, and reminiscing about partying. But, right when I was about to get out of bed to find my car keys and 3-D glasses and head down to the festival, Madonna appeared. And she looked fantastic.

But, when addressing the crowd, she referenced the song, “Last Night a DJ Saved My Life,” and all those Molly-monsters grew quiet. They had no idea what she was talking about. Then, she pulled the ultimate “trying to be a cool mom” move by asking the crowd if they had seen Molly. Why? Is she going to stage an intervention? Or will she mix it with her menopause medication?

And as these thoughts ran through my mind, I realized that me showing up there would be just as awkward as Madonna’s fist-pumping fit. My middle-aged belly ate my navel ring, and my tattoos are faded, and I am not using a port-o-potty, so I crawled back in bed and watched while eating and drinking – with my 3-D glasses on, of course.