It was Jay-Z who said, “Hoping for the best, but expecting the worst/Are you gonna drop the bomb or not?”

And that’s kind of how I felt this morning. Until about 10:03 a.m. when the SCOTUSBlog.com flashed, “We Got DOMA.”

Although they meant it as “We got the decision on DOMA,” I took it as we the people got, as in took down, that ridiculous law. At that point it didn’t matter what they meant. The fact was that we had won. The rest was a blur. Phone calls and messages began pouring in. And then the Prop8 icing on the cake – although a slightly smaller win, it’s a win indeed and we’ll take it.

It seemed surreal to be watching history unfold from behind a computer screen, unable to scream for fear of scaring the nice people right outside my office. But, in the end it was okay. Because the internet served as my megaphone, and the megaphone of so many others. Here were a few of my favorite moments: 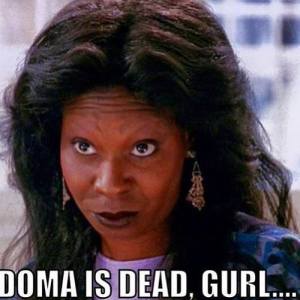 What a day! Mark your calendars: 6-26-13 is our new anniversary. And it’s a joyful one. One that makes our hearts burst with pride, which is a wonderful contrast from the other anniversaries we keep – like the anniversary of  our martyrs Harvey Milk, Matthew Shepard and Brandon Teena, or the date of the Stonewall Riots.

No. Today is not about honoring the fallen, but about pushing the movement forward. We did it. Together, we influenced public opinion, we broke through closets, mainstreamed drag culture, and now California’s Proposition 8 and the discriminatory Defense of Marriage Act both crumbled before our eyes.

Marriages in California are expected to begin again soon. And, lawfully-married couples living in the 13 states that allow same-sex marriages will soon have equal access to all the federal rights and benefits based on marital status. For married couples living in states without marriage equality, there is less clarity. So, that means that our work isn’t completely done. We must rally the remaining 37 states to join the rest of the country.

We must do this together. Because, like I always say, alone we are isolated, but together we are BOUND. Marriage BOUND.

Matthew Shepard’s mom weeps over gay marriage ruling. He asked me if I thought gay couples would ever be allowed to get married and he wasn’t at all optimistic it would happen. He was in a mindset of, ‘People are never going to accept us or understand us,'” she says. “I wish he’d been here to see it.” 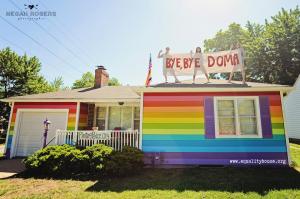 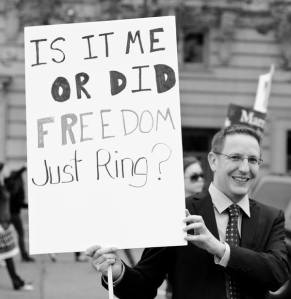 As a San Francisco based-brand, we celebrate the Supreme Court’s ruling moving California forward on the road to marriage equality.

We support love for all & invite you to participate in our#BRLove4All contest. Couples—same and opposite sex—are invited to share their photos for the chance to be outfitted by Banana Republic for their nuptials (or other special occasion).