This year we decided to embark on a road trip for our yearly “Escape from Christmastraz,” a tradition that began a decade ago where we free ourselves from the obligations of family dinners and stressful gift exchanges by simply not being in town.

I don’t do very many things right. But I can say with certainty and pride that I’m a pretty amazing driver. Sure, my passengers tend to disagree, but I know what I’m doing when I use the emergency lane as my VIP line. So, when we decided to drive I was thrilled.

We set our eyes on “the South,” specifically Georgia and South Carolina. Only technically they are “the North,” because we are driving from Florida. But nonetheless we created an itinerary called Christmas in the South.

And somehow this struck a chord with our friends and family.

Be careful, they said. And yes, they always say be careful, but this time it was genuine. It was also forceful. “I mean it,” they said. “Be careful.”

Listen, if I was going to Russia wearing nothing but a gay flag to specifically protest the Olympics, I’d understand. But Charleston? The place voted the nicest city in America for 500 years straight? I think I’ll be just fine – as long as I remember to mind my manners. Bread plate goes on the left, right?

I mean, we come from a place where cops arrest you for working at a grocery store, alligators are traded for beer and if your attacker doesn’t have a weapon, they’ll just chew your face.

A place even more south than the south.

By the time we return, there will be more ridiculous Florida stories in the news. But better still, the pine trees will have been disposed, the food will be eaten and Christmas will be nothing but a bad dream.

I, on the other hand, will return rested, plump and, yes, with credit card debt – but at least the money was not wasted on guilt gifts for family members that I rarely see.

Instead it’s spent on suites with California King beds and horse drawn carriage rides and cheesy tours. It’s spent on fancy dinners and drinks at local pubs. It’s spent on unexpected items like an emergency sweatshirt or winter boots.

And it’s what my grandmother asks me to do every Christmas. Go out and have fun she says. Spend your money on yourself and forget about us, she adds.

She really doesn’t say that.

But I’ve convinced myself she, and everyone else in my blood line, does.

So, this morning I will call them and tell them about the wonders of Savannah. Tomorrow, if I’m inclined, I’ll phone from Charleston. And after that I’ll wish them Merry Christmas from Atlanta.

And they’ll be happy. Because I’ll be safe. And mainly because I never talk to them 3 days in a row. 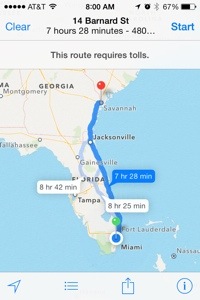 One thought on “Ease on down the road”