In many ways, the month of January reminds me of the first day of 4th grade, when my teacher, Mrs. Mir, stood in front of the class and informed us that we all had A’s and that it was up to us to keep it that way. The entire class ended up getting an A, but only because Mrs. Mir broke her hip and none of the 9 substitute teachers that cycled through the year ever recorded a single grade.

Every year, I start off with that same feeling of hope and determination to accomplish whatever stupid goal I’ve made my New Year’s resolution. But, half way through, I either lose steam or conveniently forget what my goal was. The truth is none of my accomplishments have been as a result of a New Year’s resolution. None. But, I also don’t want to be that guy that replies in the negative when someone asks me about my resolution. So, I’ve resolved to come up with a fake resolution. And, because it’s fake, I can be as ambitious as I want.

Here are a few New Year’s Resolutions I’ve come up with:

That’s all I have so far. Feel free to join in on the fake fun in the comment section below.

In the latest episode of the drama of running a lesbian ezine (if you’re not caught up, read this first), we discover, first-hand, the power of Melissa Etheridge.

Legend has it that Melissa Etheridge possesses the most irresistible vagina in the world. It was handed down to her by the Fanny God Mothers: Marlena Dietrich, Frida Khalo, and Eleanor Roosevelt. Ever since, she’s been breaking hearts and overflowing the delicate cycles of the world’s washing machines with innumerable dirty panties.

For this reason, the lesbian nest was in a stir when the news came through that the Goddess had agreed to let us interview her.

As a good editor, I made the difficult decision to remove myself from doing the interview. I was taught that editors are nothing more than nurturing mothers that encourage their children to be the best, even though they are shitty writers. So, for the sake of the group, I waited on the sidelines to watch the lesbians knock themselves out, ready to pick up the winner, wipe her bloody nose, and shove questions and talking points in her face.

To their defense, it wasn’t the blood sport I expected. There was only one injury, and it was more of an ego bruise, which will heal in 5 to 7 days.

After running resist-the-vagina drills and phone interview dress-rehearsals (hat included), I felt confident that at least 7 out of the 15 minutes would be heaven-like.

The day of the interview, I waited to hear from the writer like a patient father-to-be in a 1970’s hospital waiting room. And, when the call finally came, I picked it up at the first buzz.

“Hello?” I whispered. The conversation that followed lasted a little less than 7 minutes. Other than “Hello,” and “Bye,” I said one other phrase, over and over, which was, “I don’t believe you.”

Apparently, Melissa called. Twice. We know this because she left two voicemails. Two. In both messages she wondered why we weren’t picking up her call. 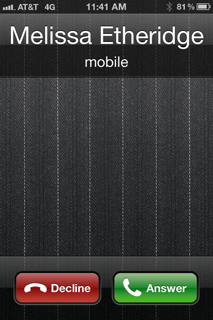 “Hello, this is Melissa Etheridge,” in all her raspy-voice-glory. “I guess we should reschedule.”

Later we come to find that all calls made to Sprint carriers were going straight to voicemail.

So, in a matter of 15 minutes, the power of Melissa Etheridge: (1.) turned Sprint in the “not Now Network,”  (2.) led a music writer to physically run-around a parking lot to check the reception on her phone; (3.) allowed me to remain calm, as I was convinced me that this was all a really bad practical joke; (4.) activated the lesbian emergency phone tree to find a landline; (5.) propelled a flurry of apology emails to publicists, assistant publicists, and executive assistants, and (6.) caused one of the co-owners of BOUND to have symptoms of a heart attack.

That’s the power of the most irresistible vag in the world.

Check BOUNDmag.com on 10.11.12 to figure out if we landed the interview, or if that writer is still out in the parking lot trying to get a signal.

Breaking news. I have a vagina.

You know what else is breaking news?

Men — well — straight men want to make sure I have one.

And, not just me, all women. They want to make sure that every woman they meet has a vagina, which is why, I think they want to get in our pants so bad.

So, that’s why today, I am breaking the news that men, especially the ones that work in government offices, can stop wondering because I indeed have a vagina in my crotch.

This past week, I had to visit a major seaport to obtain a government issued photo identification card. Only, the man behind the counter, a gentleman hailing from a Caribbean island that was once a Spanish colony, was more interested in my vagina print, than my finger prints.

Sure, it was completely and incredibly annoying. But that’s what a “working girl” goes through. Some men are more subtle than others, but it happens quite often. And it’s not because I’m cute – quite the opposite actually – it happens because men are men and this is how they’re socialized to be around all women.

What was completely and incredibly unacceptable was that I was in a government office, handing over all of my most personal information. Legal name, driver’s license, credit and criminal history, payment information, work history, addresses and phone numbers. And there was Rico Suave, intently staring at each piece.

Generally, women have to power to say, “No.” Like when a guy asks for your number, you can either say no or if you want to be polite give him a wrong number. But with this guy, it was like, “Here, have my number and my address, come pick me up at six. And don’t worry, I’ll pay, here’s my credit card so you can keep it in your pocket.”

I just want the illusion of professionalism and confidentiality. Just the illusion. I know all my information is probably shared between the workers and their “secure” network. I’m sure my file is either left on someone’s desk for days or in an unlocked filing cabinet for years. I know. But, just while I’m in front of your counter, reciprocate the respect I’m showing you. Even if that respect is also an illusion.

Seriously. Dudes that work in government offices and are somehow responsible for handling your personal information should be either super gay or super old or super castrated. I don’t think that’s too much to ask. Either that or declare government offices a “No Flirting Zone.”

They were declared “Smoke Free Environments” not so long ago, so what’s one more sign?

Something has to be done quickly, because I don’t think I can handle much more of this crap. I mean I tried every trick in the book to shut him down, but he was relentless.

The only thing I did not mention was that I was a certified, award-winning, first-class lesbian, because, in my past experiences, this just makes them even more wild.

But, I swear to the God of Lent, if he tries that crap again next week when I swing by to pick up my ID, I’m going to ask him to show me his vagina before I show him mine.